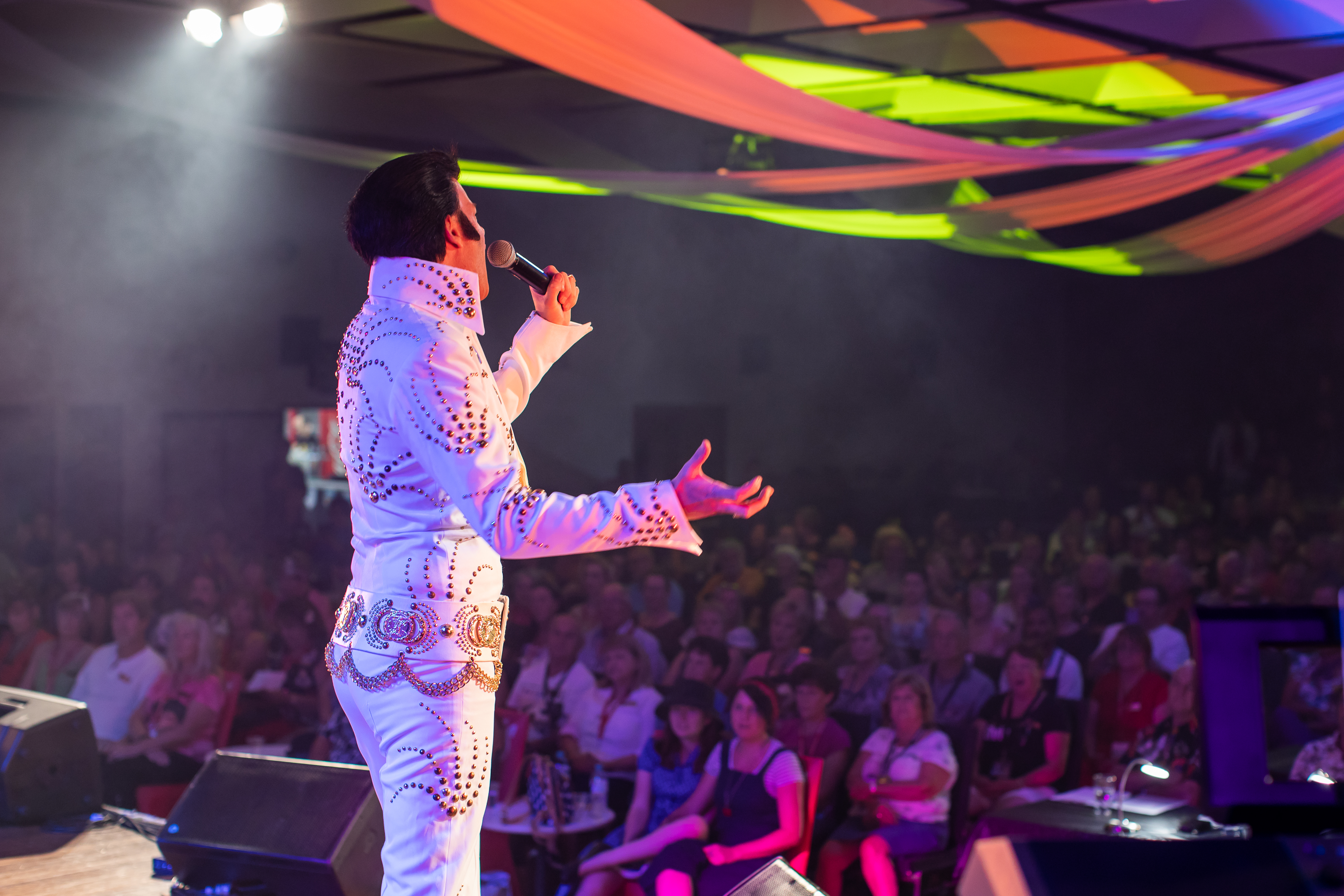 Where It All Began: Parkes Elvis Festival

In 1980, Bob and Anne Steel purchased the Parkes and District Student Hostel with the vision of turning it into a restaurant and function centre. The pair had no idea about running a restaurant. Bob was a plasterer and Anne loved cooking and for years had catered for parties and functions from her home kitchen.

After a family holiday to Disneyland, they returned to Parkes to open their restaurant. Driving to pick up some building materials Bob commented that it was a shame that they didn’t get to see Graceland whilst in the US. They decided then and there that 'Gracelands' would be the name and it sounded much better than Bob and Anne’s.

One night after a function where the guests danced to Elvis music all night, Bob and the local newspaper Editor were having a red wine and talked about starting an Elvis week in August. As it was only months away they decided upon January to coincide with Elvis' birthday and because it was a traditionally quiet time of year for visitors to the region.

Bob and Anne set to work organising the Festival which was held from 8-10 January 1993. The Festival kicked off at Gracelands with a rock 'n' roll-themed birthday party for Elvis with Elvis look-a-like and rock 'n' roll competitions.  A group of local Elvis enthusiasts, led by Bob and Anne helped deliver the Festival's program of events which included markets on the front lawn of Gracelands, a street parade, a concert with Elvis Tribute Artist and a bus tour.

Volunteers continue to play a key role in the delivery of the event, including many of the original people who have been with the Festival from the very beginning.

Bob and Anne had big visions for the Festival but little did they know that the birthday party at Gracelands for 195 people on 8 January 1993 would grow into the biggest Elvis Festival in the Southern Hemisphere attracting 27,000 people, injecting $13M into the local economy and put Parkes on the world stage with hundreds of millions of people watching.

Gracelands closed in 2005 after 25 years of business. The building was vacant for a number of years before a property developer purchased the building and opened Hotel Gracelands in February 2013.  So now you can not only eat in the original restaurant and bar, you can stay!

Anne and Bob were both awarded The Order of Australia Medals in 2008 for their services to the Parkes Elvis Festival. Now in their late 70s, the pair still play an active part in the Festival running several events and volunteering for their 28th year.

You can meet Anne and Bob at the Night of Nostalgia FREE event being held where it all began at Hotel Gracelands from 5pm on Sunday, 12 Jan. See memorabilia from the early years of the Festival, read the story of the festival on the walls, check out cars and bikes from the first parade (including the 1928 Model T Ford pictured here).

If you'd like to experience the Parkes Elvis Festival, here's what you need to do:

Book a campsite by contacting the Parkes Visitor Information Centre on 02 6862 6000 and state that you have a Camplify van. The staff will discuss availability and assist to book a temporary campsite between Monday, 6 Jan to Monday, 13 Jan 2020.

Once you've booked your site the fun begins. With more than 250 events to choose from and 80% FREE to attend you will be spoilt for choice on what to see and do.

Some highlights of the program include;

• Californian tribute artist Dean Z was named the 2013 Ultimate Elvis Tribute Artist in Memphis and is the 2020 Feature Concert artist. Dean will be performing at 5 shows at the Leagues Club

• Parkes Little Theatre will have a variety of shows including; Dean Vegas Tribute To The King, Mark Andrew Legends Show, The Soul Movers, Damian Mullin and the Elvis Hypnosis show; A Little More Conversation (memoirs from the life of Elvis) and  In Dreams Elvis and Roy Orbison.

• The ARTC Main Stage in Cooke Park has the biggest line up of FREE entertainment in Festival history including the John Field Band, Sydney Swing Katz, Greg Page and Mark Andrew will perform his Grease Show topping the evening off with a tribute to The King.

Familiarise yourself with the program of events at www.parkeselvisfestival.com.au. You can order a souvenir program from the website too.

Meet The Family With So Many Bookings Rolling In, They Have Yet To Use Their Van Themselves!