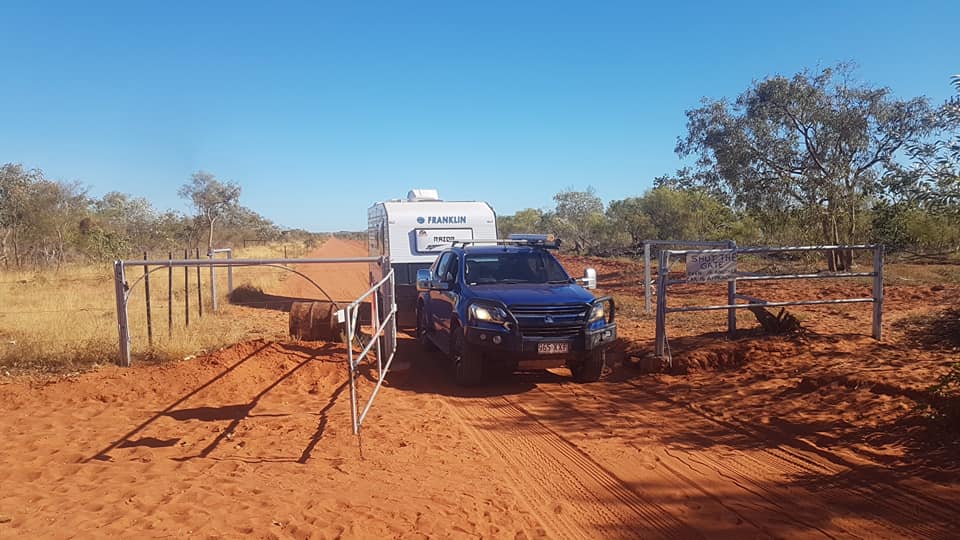 A Year on the Road in Someone Else's Caravan

An interview of year-long hirers Karen & John Wilson by Jess Lockhart.
When I reach Karen Wilson, it’s already been eight months—nearly to the day—since she and husband John left their home in Brisbane.
My timing is lucky, too. I’ve just managed to reach the couple while they stock up on supplies in Port Hedland. In just a few days’ time, they’ll be back out on the road again—and out of mobile reception—heading toward Western Australia’s Karajini National Park. It won’t be their last stop, though. The couple is currently midway through a year-long holiday, doing the big lap around Australia.
For an adventure of this length—and one that would see them living the van life nearly full-time—most couples would buy a caravan. However, Karen and John chose to buck convention by renting a Franklin Core 200 caravan through Camplify instead. It’s a decision that Karen says has given them peace of mind, a great home for the road, and save them money in the long-run.
A grown-up gap year
Karen and John’s adventure started over two years ago when they rented a commercial motorhome to travel through the Northern Territory. It was an eye-opening experience; although they had both already travelled extensively throughout Australia, they realized that caravanning was the perfect way to visit the more remote corners of the country.
The only problem? That first trip wasn’t nearly long enough.
“We really loved the lifestyle,” says Karen. “We thought, ‘wouldn’t it be great to do this and see more places?’”
Returning home, the Wilsons sat down and started compiling a list of their dream destinations in Australia.

“The list grew so big that we knew we’d need to take a year to do it.”- Karen.

Then, in 2018, the stars finally aligned. John had entered his retirement years; Karen was well-placed to take a grown-up gap year from her job as a travel agent; their adult children were making nests of their own; and there were no grandchildren in the picture yet. Simply put, says Karen, “it was a good time for us to take a year away from our family without impacting too many other people.”
With a plan in place, the pair began searching for their perfect home away from home on wheels. However, it quickly became clear that what would be the obvious course of action for most—buying a caravan—might not be the best option for the Wilsons. Living in a high-rise apartment in Brisbane’s inner-city meant that storage would be an issue. But that wasn’t their only concern.
“If you purchase a new van, you feel like you should be getting your money’s worth out of it and obligated to go on caravanning holidays every year. We didn’t want to feel that camping should be our holiday type forever. We also enjoy cruising and going overseas”, says Karen.
The only reasonable option, it seemed, was to buy a used van and resell it after a year. Budget in place, they began scouring the second-hand market, but weren’t impressed with what was on-offer.
Back to the drawing board they went. Could buying a new caravan and then selling it after a year be the solution they were looking for? It seemed like the only option, but there would be a high cost: After a year on the road, the Wilsons knew their investment would depreciate in value by $25,000 to $30,000.
A home for the road: Hiring the perfect caravan
The search for a solution took the Wilsons to the Queensland Caravan Show, where they toured a new unit that caught Karen’s eye.
“We had a look at one van and I loved it. It was beautiful,” she says. It wasn’t until they went to speak to the exhibitor that they realized it was part of the caravan share economy. The van that Karen loved was available for hire through Camplify.
This discovery ultimately changed the trajectory of their trip. They spoke with Luke, a Camplify Owner and explained their dilemma. He suggested a long-term caravan hire through Camplify as an option.
For $22,000—less than what they would lose if they were to buy a new van and resell it after their trip—they would be able to rent a brand-new Franklin Core 200 caravan for the full year. Not only that, but the price included insurance and registration, 24/7 roadside assistance and regular servicing.
A long-term van hire was the answer the Wilsons had been looking for.

“Ultimately, we’d spend less by renting from Camplify. We wouldn’t have to maintain it, store it, or register it. At the end of our trip, we would just hand it back to him,” - Karen

Since the van also came fully equipped, there was really only one thing the couple had to do: hit the road.
Canvassing the caravanning community
Now in the latter half of their big lap, the Wilsons are right at home in their 20-foot caravan. They document highlights of their travels on Gap Year Wanderings, a Facebook fan page. So far, they say the highlights have been exploring Australia’s true Outback—from opal mining towns, to Northern Territory roadhouses, to cattle stations in the Kimberley. Their days are spent bushwalking in gorges and rainforests, and their nights are spent enjoying a glass of wine under the stars at their campsite.
“We love having the ability to travel a long distance and having someplace that we can set-up in for a couple of days while we explore different areas. It’s fantastic,” says Karen.
One of the things they’ve loved most though is becoming part of the caravanning community. Every time they arrive at a new caravan park or free campground, their neighbours drop round to compare notes on their set-ups. Karen says that it’s these conversations that have further reinforced that they made the right decision when they rented long-term through Camplify.
“When you talk to other owners, they wish they had purchased something different. But now they’re locked-in and if they sell, they’ll lose money,” she says. “Ninety-nine per cent of people we talk to say that renting was a smart thing for us to do money-wise. Not only was hiring more cost-effective than buying, it gives us more flexibility and options if we want to do a different type of caravanning holiday in the future.”
They might not be the owners, but Karen and John still see the caravan as their own. “It’s our home for 12 months. We take care of it because we’re in it every day and night. We would always respect that agreement that said we’d look after it—and we do,” she says.
That’s just part of the reason that she regularly posts pictures of their set-up on social media.
“I enjoy taking photos of the van in someplace that’s unusual and tagging the owner,” she says. “That way they can see that their van is having a great holiday too.”
Interested? To find out how you could hire a van for your adventure and save money whilst doing it,  check out our long term hires page (https://www.camplify.com.au/long-term-hire)

Meet The Family With So Many Bookings Rolling In, They Have Yet To Use Their Van Themselves!