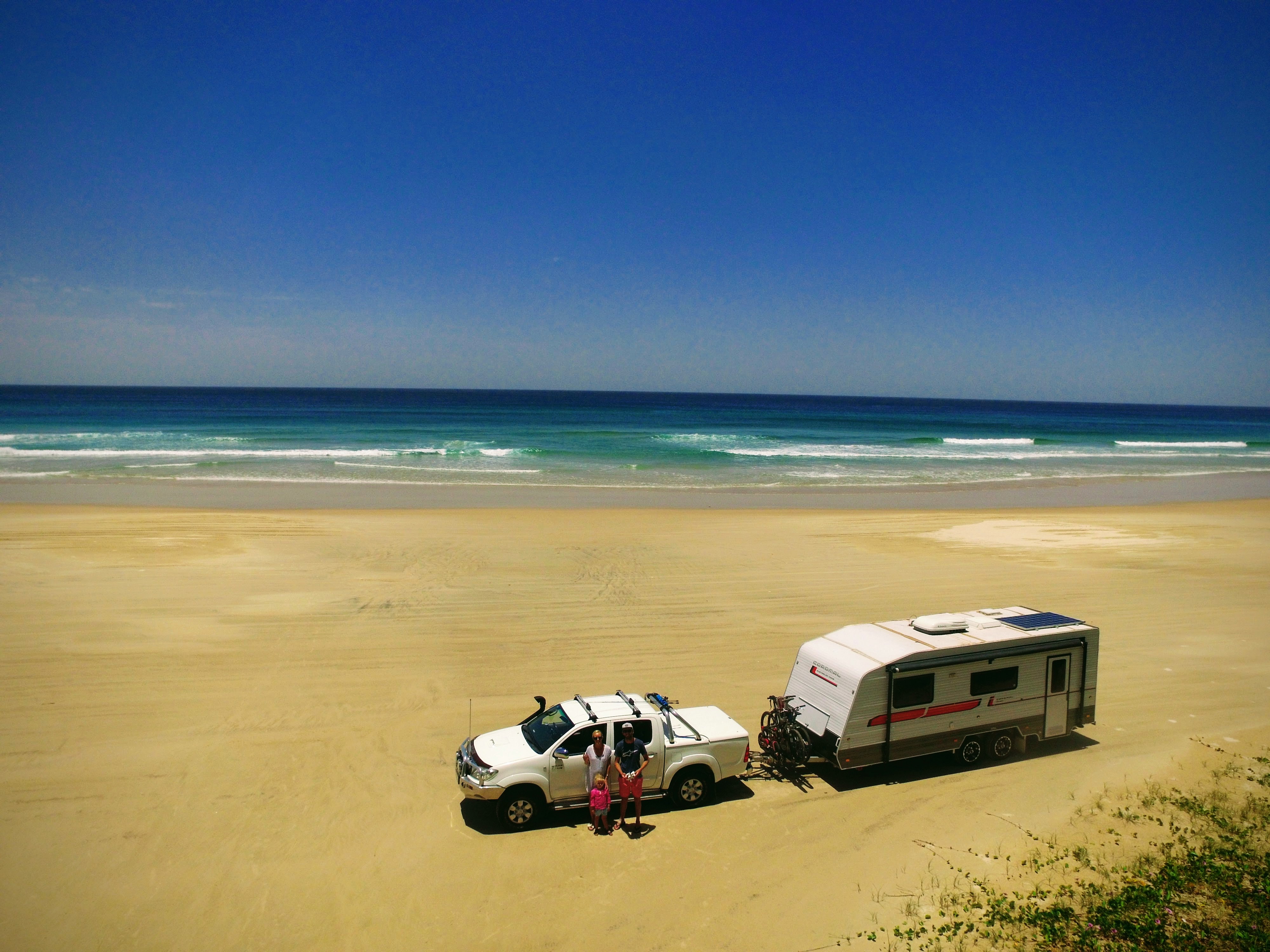 For most young families, deciding to travel around Australia in a caravan for an extended period of time would take months or even years of planning. But that doesn’t mean it has to, as parents Kim and Claire McLeod discovered firsthand.
“From the decision to on-the-road it was a six-week process,” says Kim McLeod of their van life journey. The timing was perfect; their youngest child hadn’t yet started school and they were in the process of relocating to the Sunshine Coast from southern Western Australia.

“It was a steep learning curve, but we were rewarded 10 times over,” he says. “When you’re detached from the rat race of life, you’re more aware of your surroundings. You don’t have all that clutter and noise and you’re able to appreciate things you otherwise never would, from the sun setting to even really basic tasks of life, like cooking.”
For the next eight months, the family lived in their van, lovingly known as Cruze the Coromal. But once they resettled in Yaroomba, they knew that opportunities to venture out in Cruze would be limited—at least for a few years—as Clare was about to give birth to their second child.
They listed their family caravan on Camplify in March 2019. The decision to join the caravan share economy wasn’t an easy one, though—or one that Kim took lightly. Moving into a caravan had been one of the best decisions the family had made. Kim wanted to ensure the same would be true of hiring it out. He worried about the wear-and-tear renting out his van would cause, the possible liabilities and how to best manage risk. Perhaps, most importantly, he carefully weighed the cost-benefit analysis of renting out his van through a “middleman” to ensure he would be making money.
“I’m a pretty informed decision-maker,” says Kim. It was only after thoroughly researching all his options that he arrived at Camplify: “It was more established, more professional and had a more dynamic and progressive vibe to the company.”

It was the right decision. Since listing their van on Camplify six months ago, the family has already received $12,000 in bookings and it’s only been in their driveway for two weekends.
If Kim was meticulous in his decision to join Camplify, Lauren and Greg Pullock’s decision-making process could best be described as a bit more haphazard. After travelling through Australia in 2017, the family wasn’t too sure what to do with their caravan until a friend suggested hiring it out.

“I thought that was the craziest idea that I’d ever heard,” says Lauren Pullock, laughing. “I thought nobody would rent someone else’s caravan.”
One night, they drove into the city from their home in Sippy Downs to attend a Camplify information night. It sold them on the concept.
“It’s so simple and user-friendly. Camplify does all the insurance and offers back-up support to ourselves and the customer. We thought, ‘Well, we might as well try it because we don’t have to do much,’” she says. “We thought if we could rent it out for one night a year, that would be good.”
They didn’t expect much. Within two days of listing, they had their first hire.

However, it wasn’t until they turned away 25 bookings during the summer holiday season that Lauren and Greg fully realized the potential of Camplify. Now, in addition to their original caravan, the couple manages four additional caravan listings on Camplify with their business, Outback 2 Sea Caravan Hire.
Since July 2018, they’ve earned over $60,000 in hire income, hiring out everything from a lightweight Jayco pop-top trailer to a 21-foot luxury Tornado Equippe caravan.
“I’m a stay-at-home-mum, so it’s been great to have something that could turn into a business, while I could still be there for my kids,” says Lauren, who is mum to 7-year-old Callum and 9-year-old Courtney. Launching a business she says, has been confusing at times, but Camplify has supported her throughout the process.

“It’s been good to have Camplify to ask questions and figure it out,” she says.
She pays this support forward by passing along her know-how and passion for Australia to her hirers. “I love helping people experience what we experienced and share our experiences with others in this way,” she says.
However, it’s not just Camplify that she owes the success of her business. Lauren also says that Outback 2 Sea has its location to thank.
“The Sunshine Coast is an amazing place for running a caravan hire business,” she says. “The winters are mild, you can have a good holiday at the beach year-round and there’s so much to do: beaches, mountain ranges, hiking, swimming. The Sunshine Coast has so much to offer for families.”
Kim agrees.
“I think a lot of our success comes with our location. It has all the right dynamics: an airport nearby, access to recreation and parks and a great year-round climate,” he says. “The Sunshine Coast could well be the best spot in Australia to hire out a van.”
Interested? To find out how you could earn money from your RV and become a van-trepreneur, check out our owner's page.
Explore vans available to hire on the Sunshine Coast.

We also asked Kim & Claire, Greg & Lauren about their favourite camping spots on the Sunshine Coast. You can check them out here.

Your Guide to Festival Camping in a Van

The Camping, Caravan, 4WD, Outdoor & RV Shows That We Will Be Attending In Australia This Year