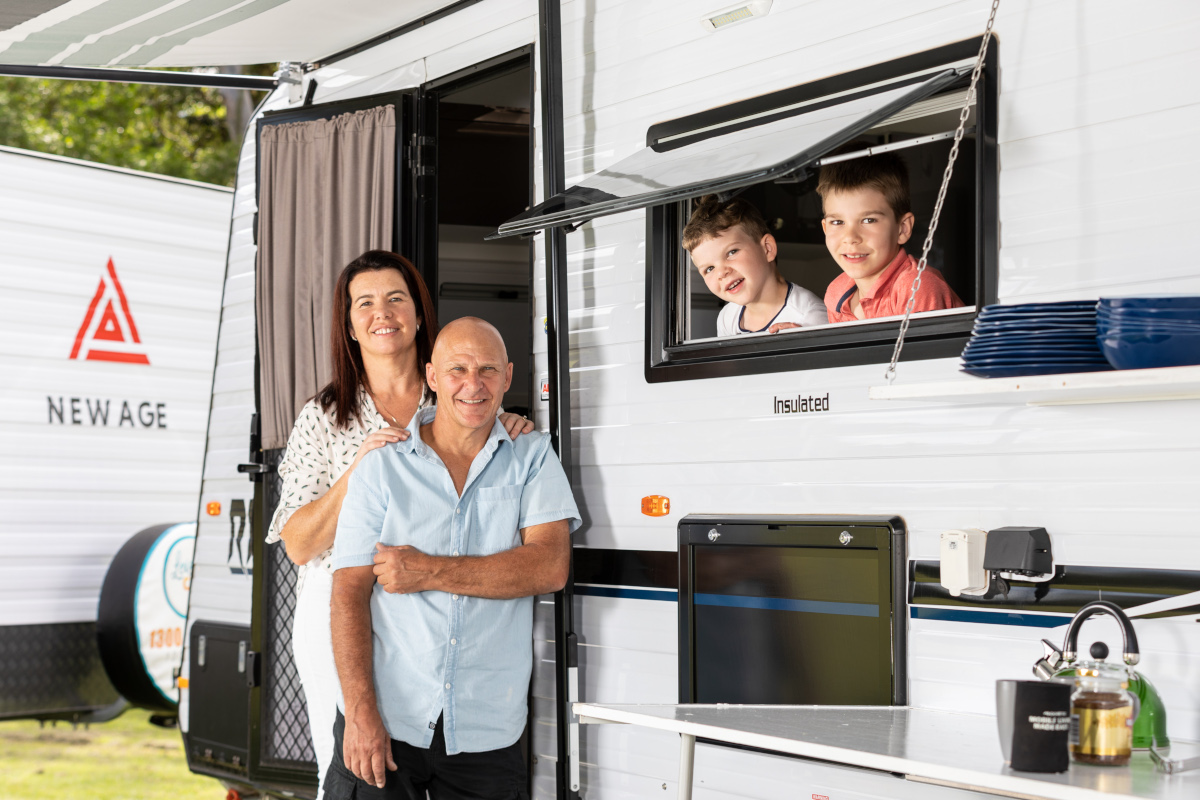 A newfound love of camping becomes a six-figure business

Two years ago, Steph had absolutely no interest in camping. The idea of the whole process—from getting dirty and wet, to sleeping in a tent and waking up on a deflated mattress—didn’t appeal to her.
“She shuddered at the thought,” says her husband, Richard.
So when the couple purchased a pop-up Jayco Swan van from Brisbane Camperland so they could take their two young sons camping, it was very much a compromise. What they didn’t expect is that the purchase would ultimately change the course of their lives.
Steph, who was unsatisfied in her job as an accountant, was surprised to discover that Jayco ignited a new passion within her.
“All the fears I had about camping just dissolved,” she says. “Every night I spent researching every brand of caravan. I bought every product that could make the experience more ‘glampified.’”
It wasn’t long before she had quit her job. With Richard in between contracts in July 2018, the family rented out their house and loaded up their newest purchase—a Franklin Core 220 caravan, complete with a queen bed, washing machine and air-conditioning—to spend three months holidaying around Queensland.

Becoming members of the caravan share economy
The family’s time living the van life (granted, a various glamorous version of van life) was transformative—and when they returned home to Brisbane, they wanted other families to have access to that same experience. Plus, with $70,000 invested into their newest caravan (along with the annual costs of insurance and maintenance), having it sit unused in their driveway didn’t make sense.
They weren’t alone. According to the Caravan Industry Association of Australia, recreational vehicle ownership is at an all-time high, with close to 680,000 vehicles registered in 2018. But although one in 13 households owns a caravan, most go unused for 322 days of the year.
The couple began investigating different business models for caravan hire. The plan was to hire their caravans out privately, until one day they heard a radio ad. Camplify—an online platform that connects owners with holidaymakers interested in hiring caravans, motorhome and campers—was going to be hosting an info session nearby.
According to Steph, it wasn’t a high-level sales pitch that won them over—instead, they heard a clear explanation of how the company could support them in making money, earning between $10,000 and $30,000 a year. With a comprehensive insurance package, 24/7 roadside assistance, and advertising support, the former accountant determined that Camplify “financially stacked up”.
“It was very down-to-earth conversation in that meeting,” says Steph. “It gave us the confidence to get on Camplify and give it a try.”
“Hire my caravan”
Caravan and camping is on the rise in Australia—according to statistics released by Tourism Research Australia in 2019, the total nights spent caravanning and camping increased by 3.5% to reach a record of 51.3 million. By listing their caravans on Camplify, Steph and Richard were tapping into a hungry market.
However, saying “here, hire my caravan”, and then watching your baby roll away with another driver at the wheel can be a daunting prospect. Not so for Steph and Richard, who were impressed by the support Camplify offered.
“I was more ecstatic about people having holidays than fearful about renting out my caravan,” she says. “I thought, ‘Wow, this is so much better than accounting.’”
It only made sense to turn her new passion into a new career. In October 2018, Leisure Caravans, Richard and Steph’s hire business, was born.
Drawing on Richard’s marketing and handyman skills, and Steph’s ability to analyse profit, losses and cash flow requirements, they’ve been able to keep their overheads at a minimum. First, they bought two additional caravans. (This was partially for selfish reason—with their original two caravans always rented out, the family wanted one for their own use.) Next, they began managing vans for other owners.

“We realized we had all our eggs in one basket. Managing vans was a good option for us because it allowed us to reduce our own overheads,” says Steph. “Josh from Camplify was a massive help to us in the early stages of expansion. He was instrumental in guiding us and introducing us to Luke from Adventure Shack, who was extremely generous with his time, knowledge and experience and gave us many hints and tips.”
Now, after only six months in operation, they’ve earned $135,000 in hire income. Leisure Caravans has grown rapidly, but the couple have no intentions of switching tact.

“What we appreciate most is the level of support we get from Camplify. When they’re quiet, they get on to our bookings and say ‘can we help you help you?’” says Steph. “Camplify offers a package that takes all the stress away of worrying about all the little bits and pieces. Instead, you can just run your business.”
Heading out on the next adventure
Now, Steph’s favourite part of her job is talking to customers when they return the caravans. She says this is made easier by the fact that she doesn’t have to ask them for a bond when they pick up, or payment when they return—Camplify takes care of all of that. This, she says, allows them to focus on building relationships based on a shared love of camping, rather than on a business transaction.
The couple currently has plans to expand their business using the Camplify platform to Cairns, the Sunshine Coast, Coffs Harbour and Sydney. By June 2021, they anticipate that they’ll have 25 managed vans across Australia. But whilst expansion might be at the top of Steph and Richard’s minds, their kids are focused on another goal.
“They keep asking when we’re going on a road trip again,” says Steph, laughing.
For Richard, the time that the family was able to spend on the road last year—when night-times were devoted to Monopoly and Uno rather than iPhones and tablets—is time that he would never give back.
“You truly experience very different feelings and experiences with your family where you’re removed from the mundane of home life and TV and mobile phones,” he says, adding that all it takes is a weekend away. “To us, that was magic.”
With a family holiday to Tasmania on the horizon, right now Steph and Richard are committed to building their business in partnership with Camplify. For Steph, who once hated camping, it’s a way to introduce others to her passion.
“If you’re a camper, you’re in our family. You’re part of us,” she says. “If we can help you, we will. We want to give our clients 100%, and Camplify helps us do that.”
Interested? To find out how you could earn money from your RV and become a van-trepreneur like Steph and Richard check out our owners’ page.

If you would like to hire a caravan from Steph & Richard for your next holiday, check out their website Leisure Caravan Hire.