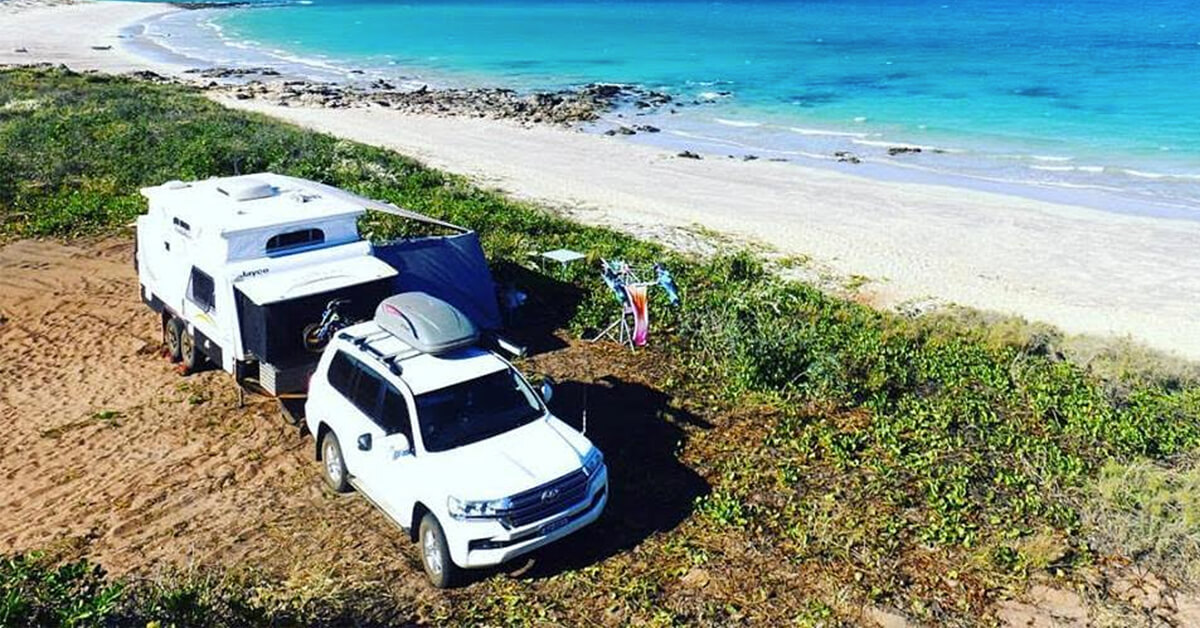 A Young Family of Five and their Camplify Story

RV owner and avid traveller, Karl, has certainly reaped rewards from listing his RV on Camplify. After purchasing a new Jayco Expanda, he and his wife Jess came across the Camplify concept via Facebook. They discussed the concept and, with the means of funding the cost of their upcoming trip across Australia, they decided to give it a go.

Karl's 2013 Jayco Expanda Outback was recently featured as one of the best 30 Jayco Expandas available for hire on Camplify. The 8 berth freedom machine has proven to be all a young family needs in a caravan. For more photos and information, visit the RV profile.

Karl had a number of fantastic bookings before embarking on his trip. Notably, he had a fantastic experience with a hirer named ‘Don’. Don, who lives in a neighbouring suburb to Karl, was in need of a few extra beds to accommodate his extended family that were visiting over a weekend. It was the Friday morning before said weekend and Don didn’t know what to do. Then, Don came across Karl’s caravan on Camplify and, without his wife’s knowledge, requested to book it as a solution to his problem. At 10am on that Friday morning, Karl received a phone call from Camplify COO Josh asking if it was ok that Don hired his van at such short notice. After talking with Don to get comfort from the quality of person he’s hiring the van to, Karl kindly agreed to drop the van off to Don and, by 5pm that day, it was set up in a safe location next to the house.

The special part of the story came when Karl met Don’s wife. Upon arrival, Karl proceeded to introduce himself and the reason he was there, to which Don’s wife replied with a look of utter confusion. Soon after, Don appeared and surprised his wife with the great news that all the family were coming for the weekend - and Karl's van was the accommodation. The confusion turned to elation, and Karl felt a great sense of satisfaction in enabling it all to be possible. On return to pick up the van, Don and his wife expressed their gratitude to Karl for letting them use his van on such short notice.

Meanwhile, Karl put the proceeds of this particular hire towards a bike rack for his family caravanning trip around Australia that was coming up at the time. In combination with a number of other successful hires, Karl was able to earn thousands of extra dollars to put towards his trip.

At the beginning of June 2016, Karl, his wife Jess, and their three little boys Cooper (five), Lachlan (three) and Bailey (ten months), embarked on their Australian caravanning adventure of a lifetime. Over four months, they made their way through Central, Northern and Western Australia in their Camplify branded Expanda. Along the way, Karl captured some amazing GoPro/drone footage and shared it on his social media blog. Read more about their caravanning trip of a lifetime in one of our other articles.

With a focus on the variety of facilities that a family can enjoy while caravanning, Karl and his family decided to capture and share their experiences with their friends and other Camplify members via a Facebook travel blog called Blue Eyes Adventure. Check it out for some great photography and video footage.

So, what now for Karl and his family?

We’re delighted to know that Camplify has helped Karl and his family make their dreams a reality. Not only did our system help them earn money for their trip, they’re also coming home to over $10,000 worth of confirmed bookings on Camplify. Not a bad investment choice for something that would normally be sitting in their backyard for the rest of the year! It's back to the rat race for Karl and the family for now but, with all of these pending hires, we think it'll be a short race before they can fund the next amazing trip.

Experience the Blue Mountains with Camplify and Bupa

Camplify on A Current Affair with Frankie J Holden